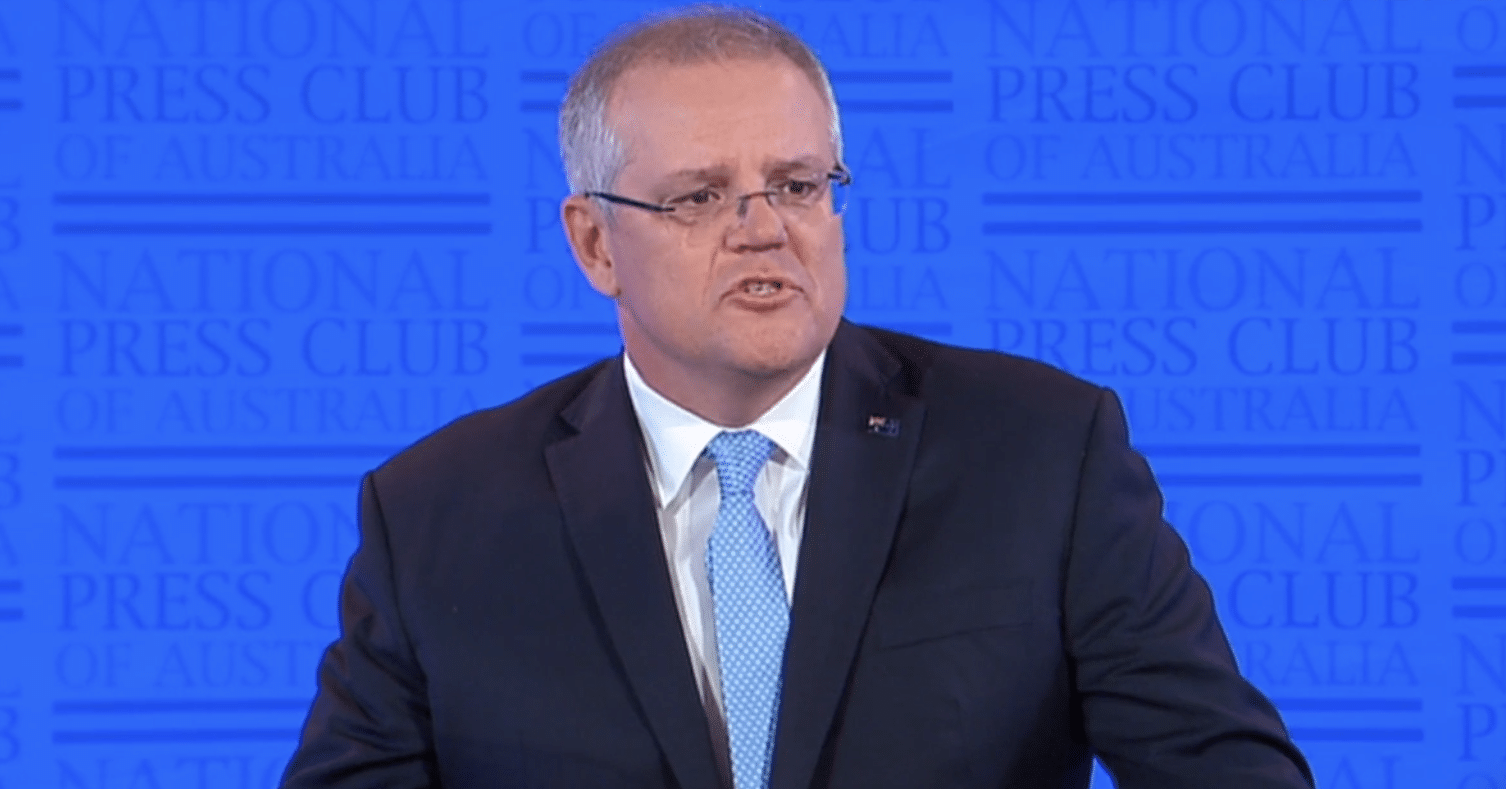 In his reply to Triple J reporter Shalailah Medhora’s question at the National Press Club on May 26, Scott Morrison needed less than 60 seconds to encapsulate everything wrong with the Federal Government’s rhetoric on young people.

Worryingly, Morrison’s muddled minute is not an isolated incident. It is the culmination of historically harmful Federal Government rhetoric on youth issues. This rhetoric, unless mediated through sincere youth engagement and specified legislative focus, is set to pervade our post-pandemic rebuild with crippling effects for the young, old and everyone in between.

So how did we get to this point?

Over the last 10 years Australia’s young people have accumulated more student-debt than our predecessors, seen fairer schools funding hamstrung, witnessed our NBN crippled, and were rewarded with the lowest mental health outcomes of any age group.

If Australia hopes to get close to emulating the past 27 years of uninterrupted economic growth, it will be us – young people – asked to carry that torch.

Intergenerational comparisons which lead to reductionism.

As any young person in Australia will tell you, we face a growing cultural antipathy. Young folk are constantly told by our politicians, our media, and our relatives that we “have it better than those before us”.

We’re told that because some of us own iPhones and have avocado brunches that we should be content and quit making a racket. It is these constant and sometimes internalised comparisons to the past that have encouraged politicians to embody a ‘job-done, next issue’ attitude when it comes to youth policy.

As a result, young people’s problems are consistently reduced to insignificance or worse, non-existence. This was elicited when Morrison responded to Medhora’s question regarding crippling international wealth gaps and a mass-casualisation of youth working conditions.

Morrison stated that Medhora was framing the situation as “some sort of generation conflict” and that this sort of thing is “unconstructive”. The PM’s defiant, ideologically driven rejection of reality is deeply frustrating. However, it provides us with a perfect example of Morrison’s internalised “better-than-those-who-came-before-you-so-be-quiet” belief.

Suppose just for a moment, that we did have it better than those before us. Is this even a just framing for imagining the potential of youth wellbeing within contemporary Australia?

Let me put it this way. In grade two I used to read Captain Underpants. Now, as a third-year university student, I read far more complex texts. Sometimes I even understand them! This isn’t to say I don’t still read Captain Underpants (book #2 Attack of the Talking Toilets was robbed of a Nobel Literature Prize), I just don’t use them as the standard for which to assess my current reading ability.

The misperception that an avocado brunch constitutes a strong economic base, has allowed young people to slowly slip from the national budgetary dialogue. Misperceptions like these, paired with “better-than-those-before-us” rhetoric have led our politicians to embody this rampant reductionism for years.

“The answer to coming out of this crisis is not setting one group of Australians against another” Morrison told Medhora after she floated the possibility of abolishing franking credits. The PM’s response all but blames young people as instigators of the ‘generation wars’.

Morrison falls drastically short of even entertaining the idea that $30 billion paid annually to older Australians as franking credits, might contribute to Australia’s systemic intergenerational inequality. Instead, he accuses the reporter of inciting a generation war in which he himself is complicit and has the power to fix.

If it wasn’t already a certainty that young people might be the victims here, hopefully the next few paragraphs make it so.

Australia’s national student debt is estimated at $66 billion, much of which is owed by young people. Growth in house prices exceeds wage growth. This limits a young person’s capacity to ever own a home.

The pandemic has also disrupted young people’s attachments to the labour market. Due to our limited time in the workforce, these attachments are less established than those of older Australians. This limits our ability to re-enter (much less enter) the workforce.

Lastly, we are faced with a newly lowered HECS repayment threshold. This diverts any surplus cash we could have saved for a mortgage deposit back to the government. A process which delays (much less denies) our already dubious entry point into an already competitive housing market.

If Morrison seriously believes that young people are the instigators of the so-called ‘generation wars’, he might also have seen pigs fly.

To any young people reading this, ask yourselves: When was the last time you felt engaged with, included or represented in a federal policy announcement? You might say, “well, the Federal government has poured money into mental health services such as Headspace.” And you would be correct. But increasing the federal spending to mental health services is not a sign mental health is getting better. It’s a sign it is worsening.

The Department of Health cites that 45.5% of Australia’s population will experience mental health issues in their lifetime. This is an astronomical number that brings into question the very functioning of our supposedly egalitarian Australian society.

Increasing mental health services is well-intentioned. Regardless, it is equivalent to plugging holes in a sinking ship while refusing to consider the ship’s own design might be at fault. If the Federal government can’t acknowledge that the rising youth mental health statistics are, in part, a reaction to young people’s fiscal insecurity, the defunding of our public education system, and a failure to act on climate change, then we are doomed for a lifetime of expensive band-aid solutions.

Young people have reason to be legitimately suspicious of Morrison’s claim regarding the new JobMaker program; that “the jobs that we will create will go first and most rapidly to young people”.

This is because ‘one size fits all’ policy rarely benefits young people. Many young casual workers were left off the JobKeeper scheme because they hadn’t worked at the business for over a year. Even JobKeeper’s backup; JobSeeker, is only available to those aged 22 and over. This mass exclusion resulted in an unprecedented 172,000 people aged 21-25 applying to access their superannuation early.

Young people are being asked to put our faith in the hands of a government whose Federal Minister for Youth is 62 years old. While that’s no personal attack, it is a baffling situation, comparable to Tony Abbot’s stint as Minister for Women.

We need targeted policy over vacuous platitudes. An updated National Strategy for Young Australians might be an excellent start considering our last National Strategy came out in 2010, the same year Ke$ha released ‘Tik-Tok’. Business as usual just won’t cut it, and if the government thinks it will, we’re going to join Ke$ha in needing a big “bottle of Jack”, pronto.

Young people remain hopeful. We hope that the Federal government will extend the olive branch to us in developing fairer, more inclusive economic policy. The government appears to be including unions in its industrial relations talks, so perhaps a seat at the table is also owed to young people?

Regardless there is still much more work to be done in the name of systematic restructuring. To achieve this, channels of communication must be opened, platitudes toned down, and policies targeted.

Below is a transcription of Scott Morrison’s response to Shalailah Medhora’s question. Maintaining a similar structure and cadence, I’ve written my own version of what I would’ve liked the PM to say.

What the Prime Minister’s should’ve said:

The answer to coming out of this crisis is not setting one group of Australians against another. to assist those groups in our community who will be most affected in the decades to come.

All Australians are in this together.

To suggest that any one group is not feeling the impacts of this one way or the other and to set it up as some sort of generation conflict I think is very unconstructive, and it’s not older Australians, who have greatly benefited from the 27 consecutive years of economic growth in Australia, should be asked to forfeit their $30 billion in annual franking credits during a time of crisis, is fiscally responsible, and will be the approach of my government.

We’ve all gotta do what we’ve gotta do.

And I agree it is hitting young people much harder, that’s why we’ve invested in additional services on mental health.

The biggest beneficiary of the process In addition to what I have outlined today, we will also be working collaboratively with young voices to create a new National Youth Strategy and a series of targeted policies that will look to give young people quality educational and employment opportunities in our post-pandemic economy. if employers and employees can come together and get this sorted, will be young people  They will be the biggest beneficiaries as they will be the ones to carry the country through the coming years.

The jobs that we will create will go first and most rapidly to young people. In future policy discussions we will be inclusive, and we will listen. We will reflect the nuanced concerns of young people from diverse communities not just in our financial budgets, but in our cultural rhetoric. That is the most important thing I think we can do to help them.

Sweeney Preston is a 22-year-old comedian, cinema worker and anthropology student at the University of Melbourne. He is a board observer at the Malthouse Theatre Company and co-leads their youth ambassadorship program, Vanguard. Sweeney is alumni of the infamous Melbourne University Law Revue and is passionate about pigs, people and politics.

What Future? Inquiry into Youth Employment and Transitions